Addatoday
on 11:59 AM
3 comments
Just off the Deshnoke junction on the way to Bikaner, you can find one of India’s most incredible travel sights - The Karni Mata Mandir. In the many myths and legends of Indian mythology lies the story of this temple’s origin. Apparently when Laxman, Karni Mata’s stepson drowned in a pond in KapilSarovar in Kolayat Tehsil, his stepmother implored the God of Death, Yama to revive him. Yama final relented and converted Laxman and all the male children of Karni Mata to be reincarnated as rats and this abode of the rats, is the Karni Mata Mandir- the Temple of Rats. 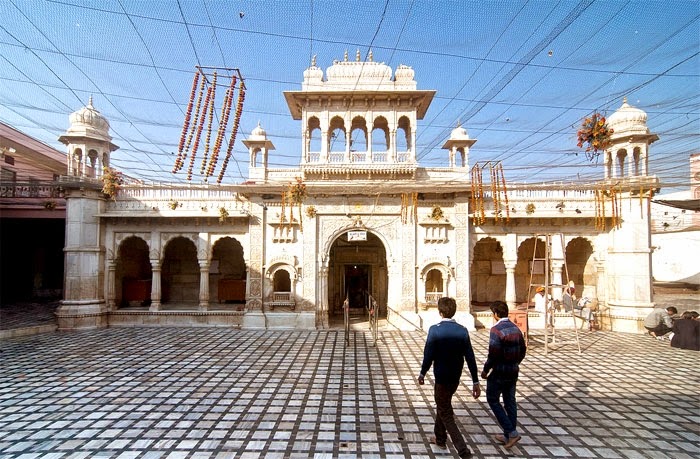 Image Credits Anoop
As incredulous as the tale is, the Karni Mata Mandir, about 30 kilometres from Bikaner in the state of Rajasthan is home to 20000 odd black rats which live in the temple and are the reason why many tourists from within the country and abroad come to see the spectacle and even take their blessings if possible. Upon first sight, the temple is without doubt an architectural marvel and is a product of the imagination of Maharaja Ganga Singh, the 20th century king of Bikaner. The temple, with its marble façade, strong silver doors that lead into a temple with depictions of the Goddess on the panels, is equally famous for the inner sanctum sanctorum where an image of Karni Mata is enshrined and worshipped. On the way in, one can find marble carvings and solid silver gates, which were a recent addition made by KundanlalVerma of Karni Jewellers as paying homage to the Goddess in 1999. 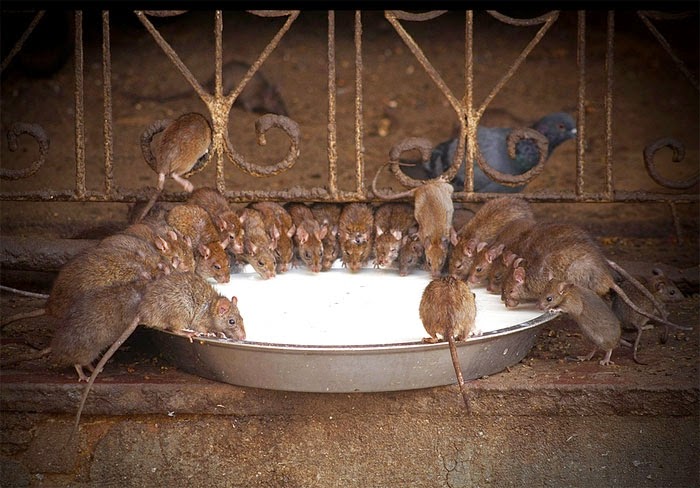 Image Credits Collier
The peculiarity doesn’t stop there. The temple doors open to the public as early as 4 A.M in the morning, but the worshippers make their offerings to the rats and not to the Goddess as such. There are various types of offerings that they can make and amidst all this worship, the one thing that devotees yearn for are white rats. With a very miniscule number of white rats living the temple, they are considered as the holiest of rats and are made special offerings. People will event go to the extent of searching for them in the entire temple.
Even if one rat is killed due to any circumstances, it is a belief that it must be replaced with a rat made of solid gold and donated to the temple. However, the most startling fact about this temple yet, is that devotees would prefer to eat the food that has already been nibbled on by a rat, rather than eat the prasad or offering given by the temple’s priests. The temple even made a worldwide appearance when it was showcased in one of the episodes of the Amazing Race and Ripley’s Believe It or Not.
It is quite clear that this is no ordinary temple and chances are people might not feel comfortable in visiting such a place. But therein lies the beauty of the entire trip. The ride to the temple through Rajasthan is spectacular and scenic. The temple’s beauty can make a photographer go crazy trying to get every single sight on roll. The temple is genuinely clean despite the rats travelling around and one can be assured that the rats won’t beat, unless they have been provoked. The temple also has some very enthusiastic and artistic guides who can give you a whole tour along with revealing the tales and secrets of the temple.
There be should be no doubt that the Karni Mata Mandir should feature in everyone’s list of places to visit before they die. Go to this temple to experience a unique sight, a startling sight, but surely a beautiful sight.
About Author:
Rohit Agarwal is an architect by profession and a vocational traveller by passion. He is a regular blogger at www.transindiatravels.com. Having travelled to a variety of places in India, Rohit is enthusiastic to travel to and experience the marvels that the country and the world have to offer.