Addatoday
on 2:22 AM
16 comments
About The Great Amazon River - The Amazon River in South America is the second longest river in the world and by far the largest by waterflow with an average discharge greater than the next seven largest rivers combined (not including Madeira and Rio Negro, which are tributaries of the Amazon). The Amazon, which has the largest drainage basin in the world, about 7,050,000 square kilometres (2,720,000 sq mi), accounts for approximately one-fifth of the world's total river flow. 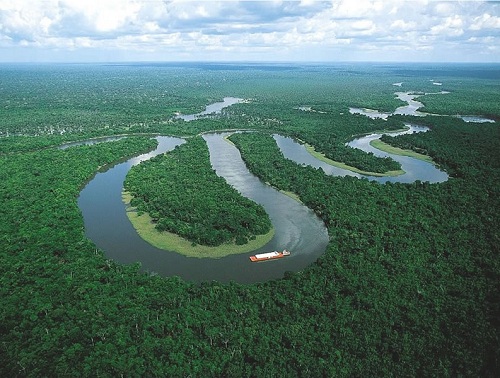 In its upper stretches, above the confluence of the Negro River, the Amazon is called Solimoes in Brazil. In Peru, Colombia and Ecuador, as well as the rest of the Spanish-speaking world, the river is generally called the Amazon downstream from the confluence of the Maranon and Ucayali rivers in Peru. The Ucayali-Apurímac river system is considered the main source of the Amazon.

The width of the Amazon varies between 1.6 and 10 kilometres (1.0 and 6.2 mi) at low stage, but expands during the wet season to 48 kilometres (30 mi) or more. The river enters the Atlantic Ocean in a broad estuary about 240 kilometres (150 mi) wide. The mouth of the main stem is 80 kilometres. Because of its vast dimensions, it is sometimes called The River Sea.
The Amazon Rainforest, also known as Amazonia or the Amazon Jungle, is a moist broadleaf forest that covers most of the Amazon Basin of South America. More than half of the forest is contained within Brazil, the rest of it in Peru, Colombia, Venezuela, Ecuador, Bolivia, Guyana, Suriname and French Guiana, covering five and a half million square kilometers, or 1.4 billion acres.

Peru - The Amazon covers nearly two-thirds of Peru. Tambopata National Reserve in the southern region is known for its clay lick, where macaws and parrots gather in the thousands to feed. Here you can lodge at the Tambopata Research Center, run by Rainforest Expeditions. More pristine, but expensive and cumbersome to visit, is the Manu Biosphere Reserve. It is infinitely easier to explore the more developed northern Peruvian Amazon, which includes the Pacaya-Samiria National Reserve, the country's largest protected area. The reserve is accessible only through lodges or on a riverboat cruise such as those offered by GreenTracks' Amazon Tours & Cruises. The gateway to Peru's northern Amazon is Iquitos, the country's largest jungle city, reachable by plane.

Ecuador - Around 11 percent of Ecuador's land, all in the eastern part of the country, is covered by the Amazon. There are nine parks and reserves in this region, known as El Oriente. Among these is the vast Cuyabeno Wildlife Reserve, 19 miles miles east of the city of Lago Agrio and accessible only via boat. Several of the reserve's indigenous communities welcome visitors. Ecuador's largest and best protected span of rain forest -- and consequently one of the least accessible -- is Yasuni National Park, home to nearly 600 avian species. You can visit through a lodge such as the Napo Wildlife Center or on a river cruise with Manatee Amazon Explorer. Other worthwhile sights in the Ecuadorian Amazon include the active El Reventador volcano and the San Rafael waterfall in the Napo province.

Brazil - Manaus in the Brazilian Amazon is the basin's largest city. Here you can visit the Meeting of the Waters, where the Rio Negro arrives at the Rio Solimoes. Due to differences in temperature, salinity and other properties, the two tributaries flow adjacently for several miles before merging to form the Amazon. Lodging options here include the Ariau Amazon Towers, 35 miles northwest of Manaus, which offers treetop accommodations. The resort arranges excursions to the Anavilhanas Archipelago, the world's largest freshwater archipelago. Moreover, at the Amazon's Atlantic estuary stands the 17th-century city of Belem, where the Ver-o-Peso Market is a mecca for Amazonian products such as fish and fruit. From Belem, take a ferry to Marajo, the planet's largest river island, where ranches such as Fazenda Sanjo allow tourists to ride horses and buffalo through flooded fields.

Colombia - The Amazon covers one-third of Colombia, but only the city of Leticia, the capital of the country's Amazonas department, and the surrounding forest are accessible. The region is notorious for cocaine production, but is considered safe to fly into Leticia, from which you can take a boat to Amacayacu National Natural Park, known for its bird and reptile life. On the way you will pass by Monkey Island, named for the primates that inhabit it. The other important urban center in the Colombian Amazon is Puerto Narino, an obligatory stop if you wish to swim with the Amazon's endemic pink dolphins in the Tarapoto lakes.

2. Cabo Orange National Park - This National Park is the only one in the Amazon rainorest on the coastline. The vegetation and fauna found there is slightly different from the other parks, since it is influenced by the Atlantic ocean ecosystem. This Park has some infrastructure but just for their permanent staff, not for visitors yet. Nevertheless it's possible to visit the park by boat from the Oiapoque city in the Amapa state of Brazil . It's a unique place to see the transition of two very different ecosystems, the Amazon rainforest and the Atlantic Ocean .

4. Cantao State Park -  Located in the Brazilian state of Tocantins, this state protected area is just where the Amazon Rain Forest begins, showing the transition between the Cerrado ecosystem (a savanna-like ecosystem in middle of Brazil ) and the rainforest. This is a new Park and even Brazilians don't know it very well. Also, this is one of the few protected areas that actually have tourist infrastructure. To visit this park you should go to the Tocantins state capital Palmas.

5. Jau National Park - This is another giant protected area with similar size to Belgium . This park is close to Manaus (capital of Amazonas State in Brazil ) which has all the accommodations and services tourists could need. This park has awesome rivers to explore by voadeira and canoes. In this area you can also hire a medium size boat for a whole day or even an overnight trip if you are traveling in a group. It's a very nice way to go where regular tourists don't go due to lack of transportation. The Jau National surroundings have some regular tourist activities like the wonderful Carabinani river.

6. Mamiraua - Mamiraua is an astonishing place and provides full services for tourists, including a floating hotel. The area of Mamiraua is probably the most beautiful in the whole Amazon rainforest. The whole region is made of flooded forest and you can enter the forest with a canoe or just do trekking in the marked trails for tourists. To go to Mamiraua you need to go to City of Tefe , in the Amazonas State .

There are many other places, the ones named above just show a small part of it, in Colombia you can visit the "Salto Angel" waterfall. This is the biggest waterfall in the world located in the Amazon rainforest and has more than half mile of free falling water, another wonderful view. There are also possibilities to visit indigenous tribes in some places and see their rituals live. Wherever you go, you will like it, there is so much to be seen that you don't risk get bored over there. The toughest part is choosing how much time you want to spend on your trip to Amazon Rainforest.