Addatoday
on 3:19 AM
No Comment
Bora Bora Island in Tahiti is one of the most happening and upcoming Holiday destination in the world. First of all about Tahiti, it is the largest of the 118 islands and atolls that comprise French Polynesia. Tahiti is in the Society Islands, an archipelago which includes the islands of Bora Bora. Tahiti and Bora Bora Islands lie in South Pacific.

Bora Bora is an Volcanic Island in the Leeward group of the Society Islands of French Polynesia, an overseas collectivity of France in the Pacific Ocean. The island, located about 230 km (140 mi) northwest of Papeete which is the Capital City of Tahit. It is surrounded by a lagoon and a barrier reef. In the centre of the island are the remnants of an extinct volcano rising to two peaks, Mount Pahia and Mount Otemanu, the highest point at 727 m (2,385 ft). 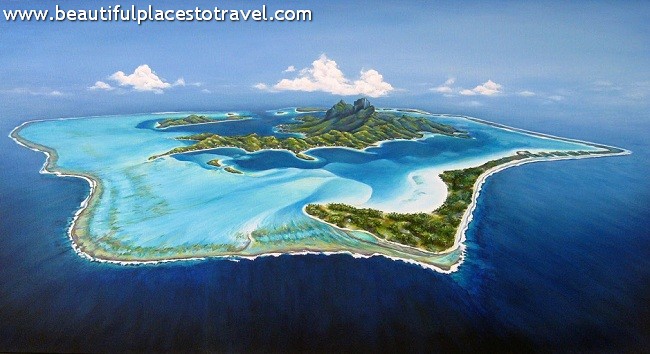 Bora Bora is a major international tourist destination, famous for its aqua-centric luxury resorts. Today the island's economy is driven almost solely by tourism. Over the last few years several resorts have been built on motu (small islands, from Tahitian) surrounding the lagoon. Thirty years ago, Hotel Bora Bora built the first over-the-water bungalows on stilts over the lagoon and today, over-water bungalows are a standard feature of most Bora Bora resorts. The quality of those bungalows ranges from comparably cheap, basic accommodations to very luxurious and expensive places to stay. 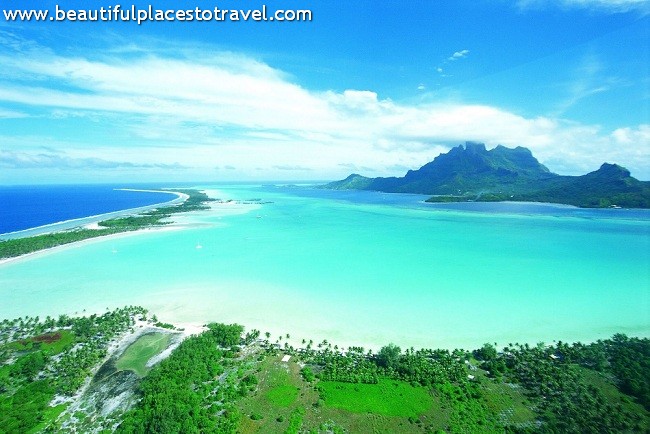 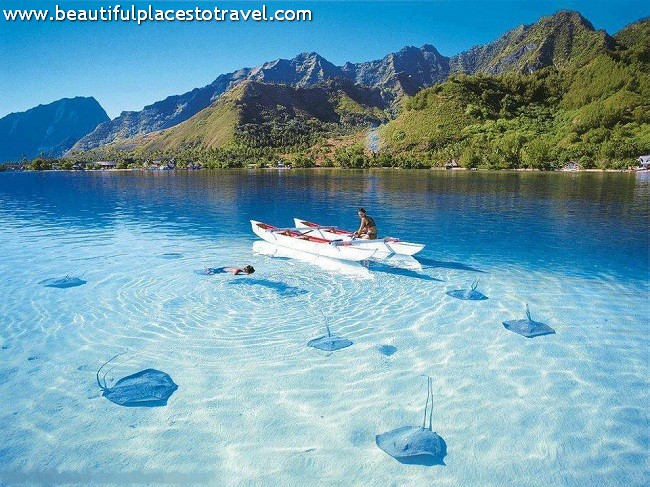 Most of the tourist destinations are aqua-centric; however it is possible to visit attractions on land such as WWII cannons.

Air Tahiti has five or six flights daily to the Bora Bora Airport on Motu Mute from Tahiti (as well as from other islands). The island is served by Bora Bora Airport on Motu Mute in the north, with Air Tahiti providing daily flights to and from Papeete on Tahiti. Public transport on the island is nonexistent. Rental cars and bicycles are the recommended methods of transport. There are also small fun-cars for hire in Vaitape. It is possible to rent a motorboat to explore the lagoon. Snorkeling and scuba diving in and around the lagoon of Bora Bora are popular activities. Many species of sharks and rays inhabit the surrounding body of water. There are a few dive operators on the island offering manta ray dives and also shark-feeding dives. In addition to the existing islands of Bora Bora, the new man-made motu of Motu Marfo has been added in the north-eastern corner of the lagoon on the property of the St. Regis Resort.

Posted by Addatoday at 3:19 AM