Addatoday
on 2:41 AM
1 comments
As Fifa World Cup 2014 is to start from today (12th June) in Brazil, there are many World Stars who will feature in it. Let's look at few of the World Star who should take this World Cup by storm. Yes, list is plenty and many big names misses out. But what to do when we have to select from a list of Top 32 Nations which are taking part in Football biggest global event. Still tried to list few from various countries playing in this World Cup. Hope all these Rockstar of Football creates magic in this year World Cup in Brazil. Have a look.

20. Luka Modric - Champion midfielder, playmaker and can attack when needed, will be crucial for Croatia World Cup chances in Brazil. Plays for Real Madrid and Croatia. 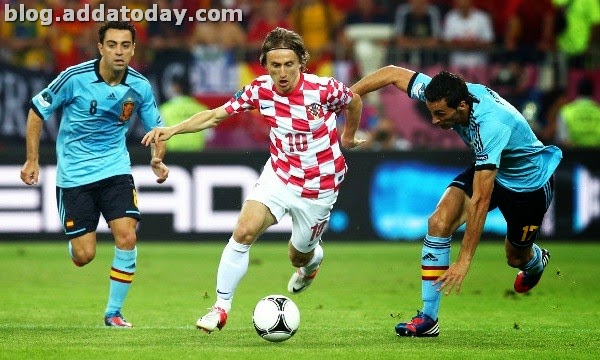 19. Andrea Pirlo - Veteran Legendary Midfielder. Winner of World Cup 2006. Knows how to create attacks. Heart and Soul of Italian team even at age of 35. Plays for Juventus and Italy. 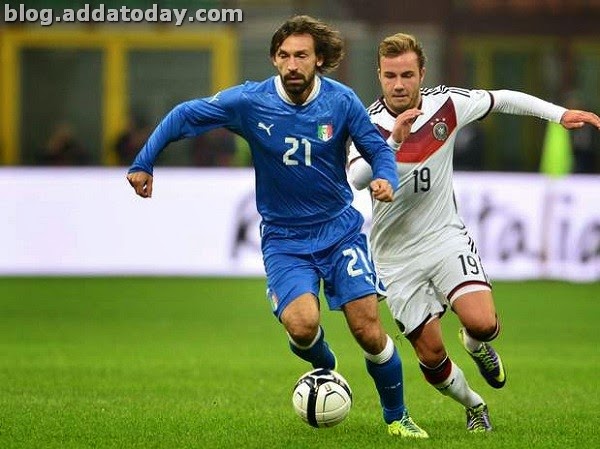 18. Steven Gerrard - Legendary midfielder will bring lots of experience in addition to skills to this relatively new English Team in World Cup. Team will definitely revolve around him. Plays for Liverpool and England. 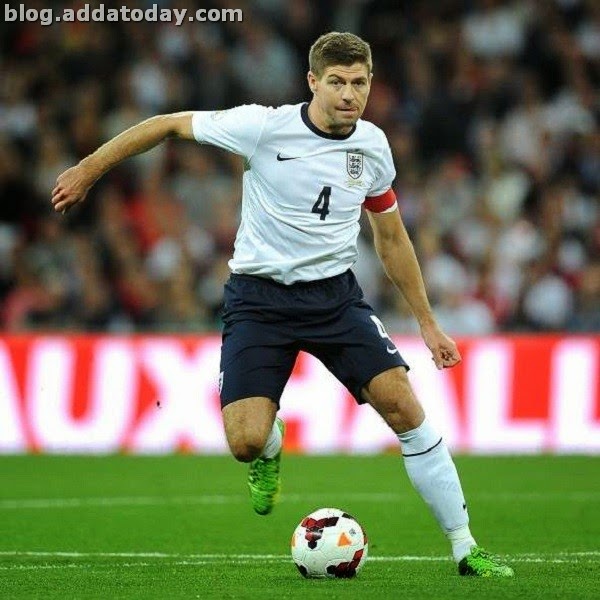 17. Diego Forlan - Last time Golden Ball winner. A Veteran, but never count him out when it really matters for his nation Uruguay. Big match player. Plays for Cerezo Osaka and Uruguay. 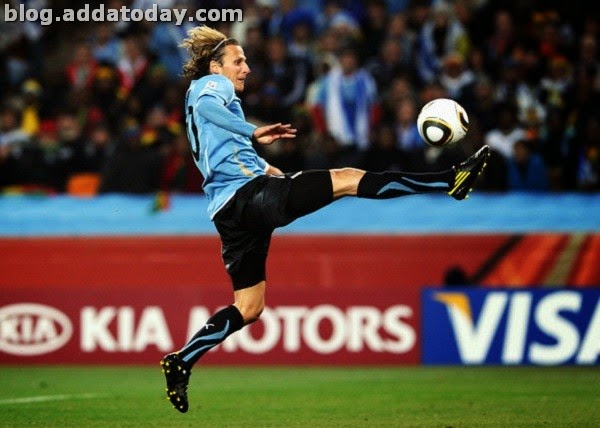 16. Xabi Alonso - Defensive Midfielder and deep-lying playmaker for Spain. When chips are down and count on him. Forms fearsome force with Xavi, Iniesta and Fabregas for Spain. Plays for Real Madrid and Spain. 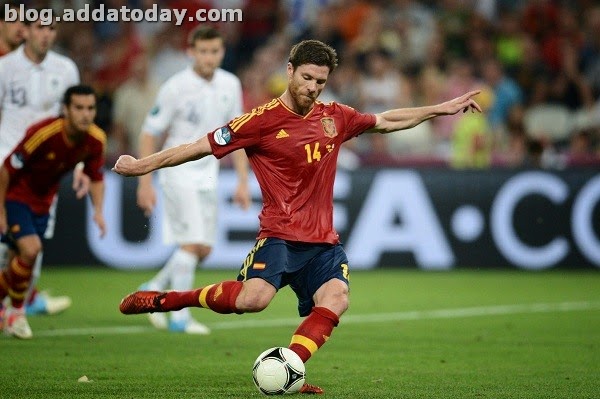 15. Eden Hazard - Promising Belgian forward. One of the fresh faces to look in this World Cup. If Belgium are referred as a strong nation in this World Cup, then Hazard is one of the important reason for that. Plays for Chelsea and Belgium. 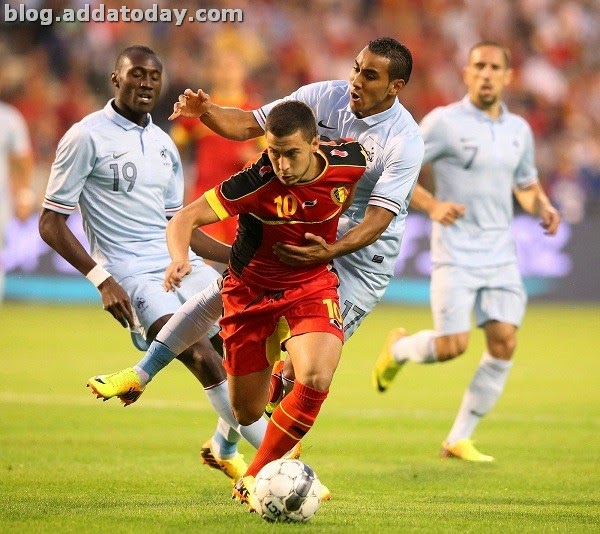 14  Arjen Robben - Playmaker, who can play in Forward also. Shown magic in 2010 World Cup and took Netherlands to the Final. Hope he repeats his performance once again. Plays for Bayern Munich and Netherlands. 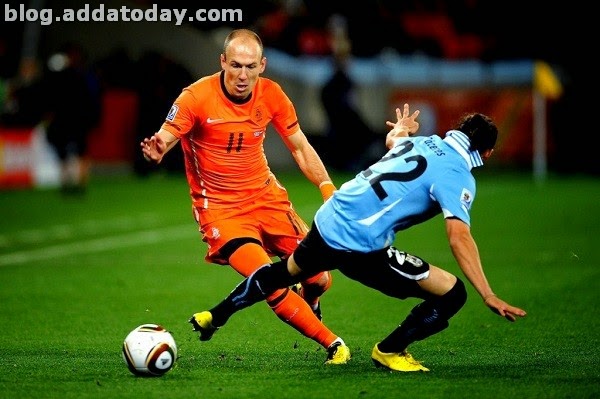 13. Thomas Muller - Prolific goal scorer for Germany in big matches. With World Cup 2010 experience in his back and looking right now in prime form. Can play in midfield to attack. Plays for Bayern Munich and Germany. 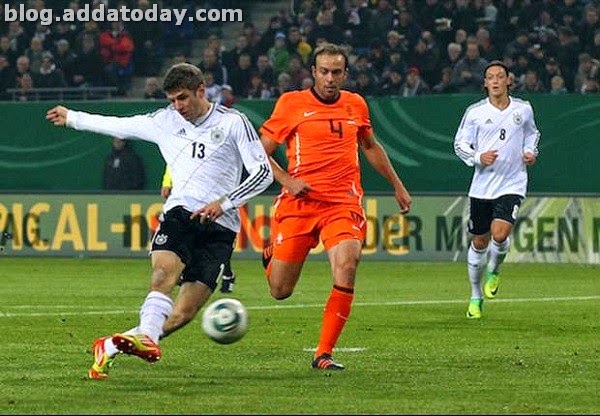 12. Robin Van Persie - No.1 striker of Netherlands and one of the best in Europe and World right now. If Netherlands has any chance of going the distance in this World Cup, then Van Persie must have to fire all cylinders. Plays for Manchester United and Netherlands. 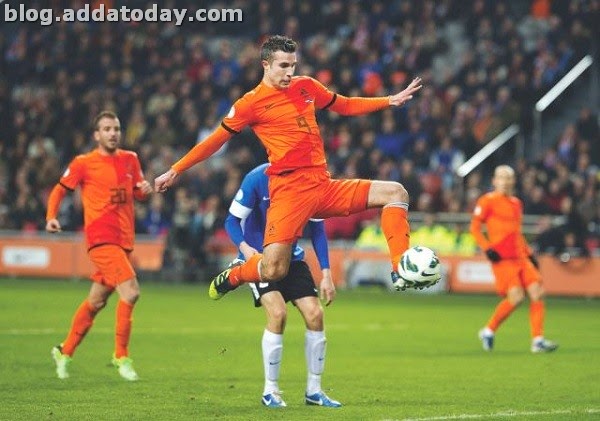 11. Sergio Aguero - Most prolific striker of English Premier League last season. With Messi and Di Maria as support staff in Argentina team, look out for this deadly striker in World Cup. Plays for Manchester City and Argentina. 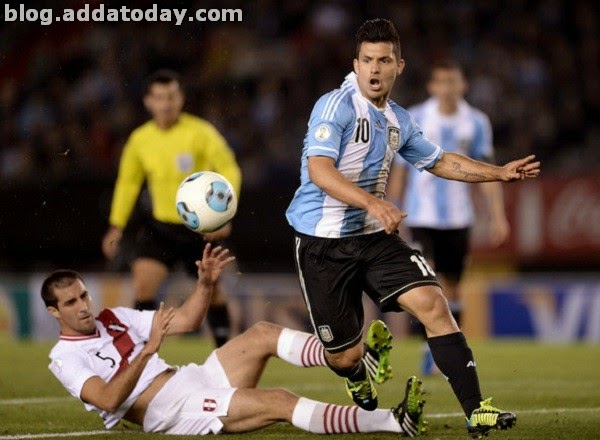 10. Didier Drogba - African and Chelsea legend. Nicknamed - Goal Machine. One of the deadliest striker ever, even when he is nearing his twilight of his career. Cote d'Ivoire all hopes lie on this Superhuman in this World Cup. Plays for Galatasaray and Cote d'Ivoire. 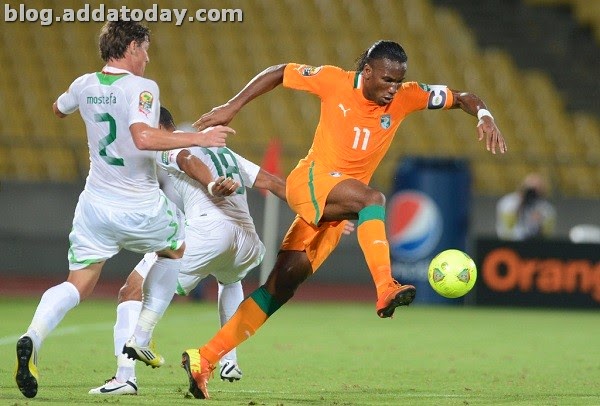 9. Diego Costa - Many pundits say he is one of the best strikers in the World right now. Many considers him in same wavelength as Messi and CR7. Will Costa take Spain to their second successive triumph in Brazil. Plays for Atletico Madrid and Spain. 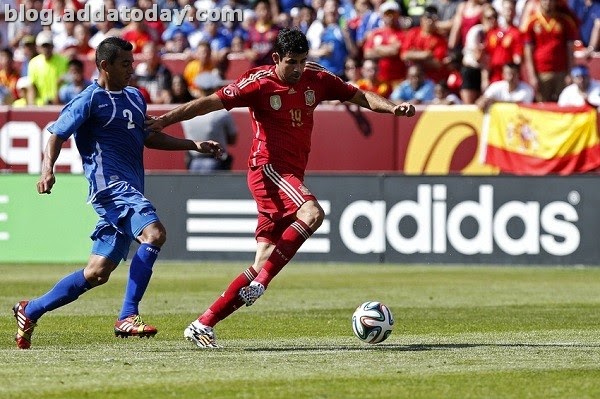 8. Oscar - Playmaker of Brazil. Many touted him as present day Ronaldinho. Can play in midfield, assist, score goals. Total team man and talented youngster to play this World Cup. Oscar and Neymar is a deadly strike force that whole world will wary this time. Plays for Chelsea and Brazil. 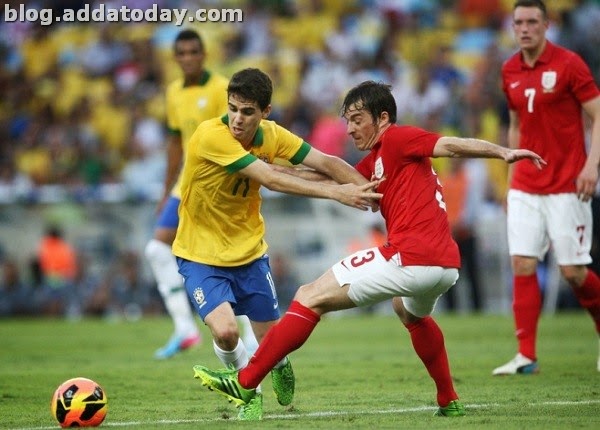 7. Andres Iniesta - Termed as magician in field. Central Midfielder can just play anywhere. Creates numerous chances and score goals. One of the main weapon for Spain and took his nation to World Cup 2010 victory. Can he repeat his performance? Plays for Barcelona and Spain. 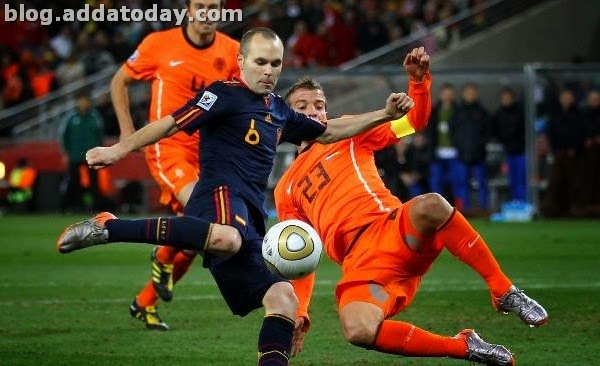 6. Luiz Suarez - Most Dangerous Striker of present time if one looks to his recent performance in Europe last season. Will he be able to transform his present form into his National Team Uruguay in World Cup. Plays for Liverpool and Uruguay. 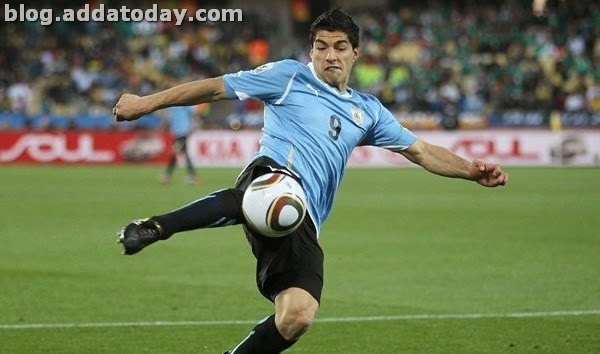 5. Bastian Schweinsteiger - Touted as one of the best central midfielder in world. Shine in last World Cup and again hopes are on him to take Germany to ultimate glory this time. Plays for Bayern Munich and Germany. 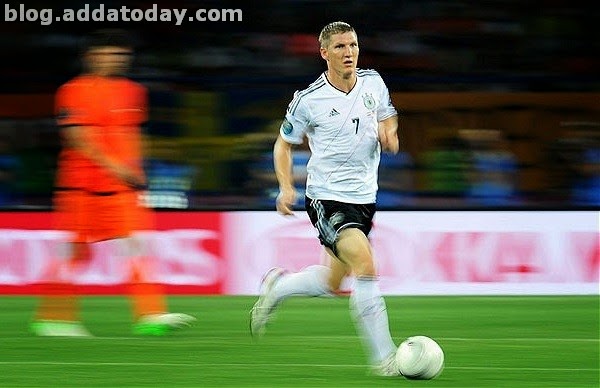 4. Xavi - Xavi is one of the most talented central midfielder in the world. Playmaker for Spain. Alongwith Iniesta and Alonso he forms deadliest midfield combination for Spain. Plays for Barcelona and Spain. 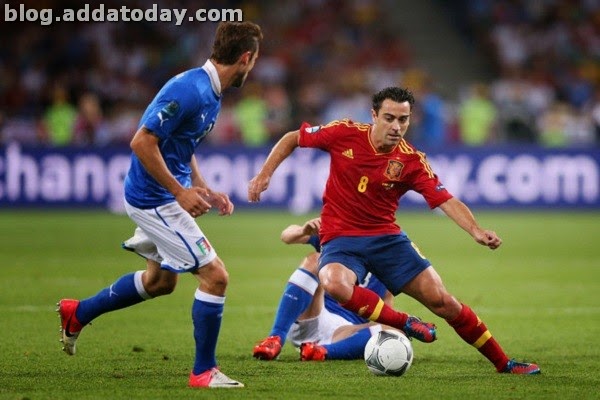 3. Neymar - Nicknamed - Wonder Boy of Brazil. Touted as next best in Brazil. Already helped Brazil to Confederation Cup last year. This World Cup might be rise of this new Superstar. Plays for Barcelona and Spain. 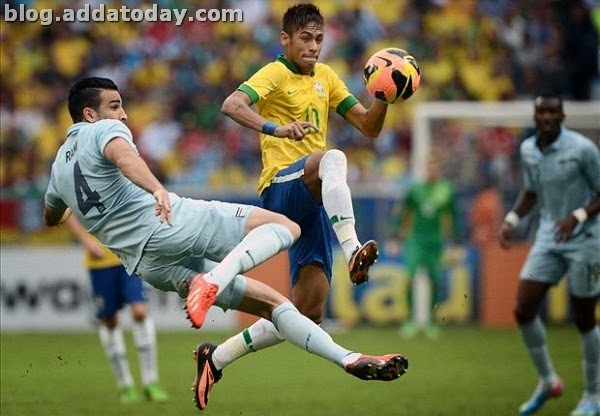 2. Cristiano Ronaldo - Current Fifa Ballon d’Or holder and member of Champions League winner. CR7 is one of the best player in the world, if not the best right now. if Portugal dream of World Cup in Brazil this year, then this is the Superhuman to deliver for them. Plays for Real Madrid and Portugal. 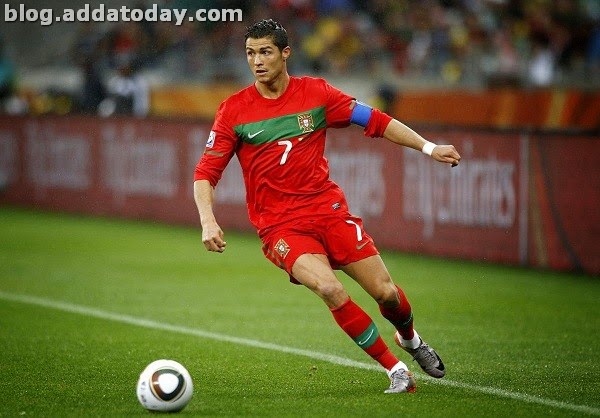 1. Lionel Messi - Might be the best player in planet at the moment. Under-performed by his standard in his previous two World Cups and even confessed by himself. Messi is out to prove few points in this World Cup. Don't be surprised if Messi went on to win either or both Golden Ball and Golden Boot award and take Argentina to their 3rd World Cup Triumph in Brazil this year. Plays for Barcelona and Argentina. 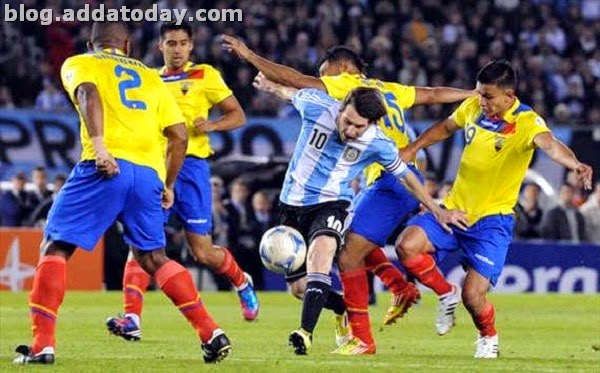 Posted by Addatoday at 2:41 AM