8 Best Places for Scuba Diving in the World.

Addatoday
on 3:52 AM
21 comments
Have you ever done Scuba Diving? Also have you thought of amazing places around the world where most astonishing scuba dives are performed? Yes or no whatever your answer, here you will find the most amazing or simply best places in around world to do Scuba Dives. Below are 8 best places in world for Scuba Diving. Hope you like it. 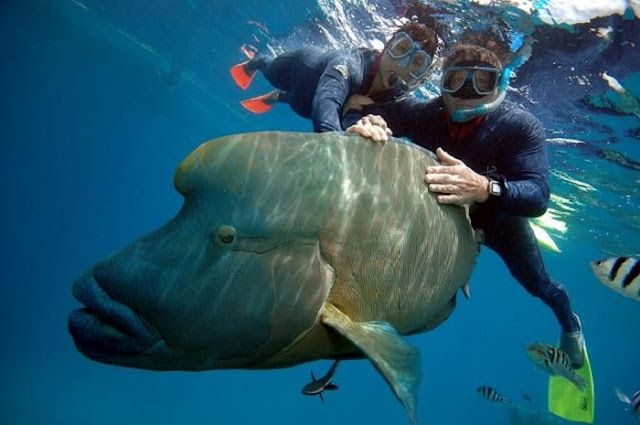 The Great Barrier Reef is the world's largest reef system composed of over 2,900 individual reefs and 900 islands stretching for over 2,600 kilometres (1,600 miles) over an area of approximately 344,400 square kilometres (133,000 sq miles). The reef is located in the Coral Sea, off the coast of Queensland in north-east Australia. The Great Barrier Reef can be seen from outer space and is the world's biggest single structure made by living organisms. This reef structure is composed of and built by billions of tiny organisms, known as coral polyps. It supports a wide diversity of life and was selected as a World Heritage Site in 1981. CNN labeled it one of the seven natural wonders of the world. 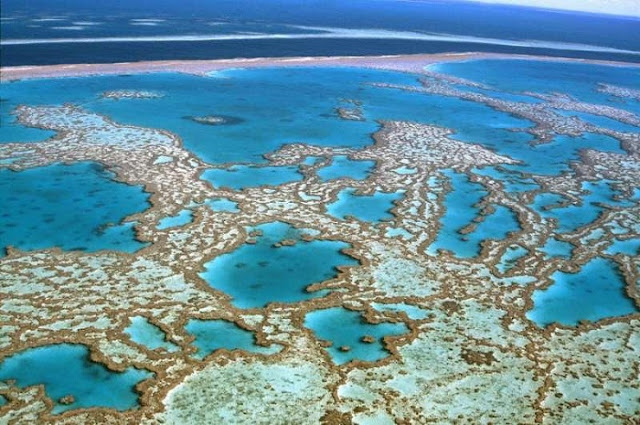 Due to its vast biodiversity, warm clear waters and accessibility from the tourist boats called 'live aboards', the reef is a very popular destination, especially for scuba divers. Tourism on the Great Barrier Reef is concentrated in the Whitsundays and Cairns due to their accessibility. These areas make up 7% of the Park's area. The Whitsundays and Cairns have their own Plans of Management. Many cities along the Queensland coast offer daily boat trips. Several continental and coral cay islands are now resorts, including the pristine Lady Elliot Island. As of 1996, 27 islands on the Great Barrier Reef supported resorts. 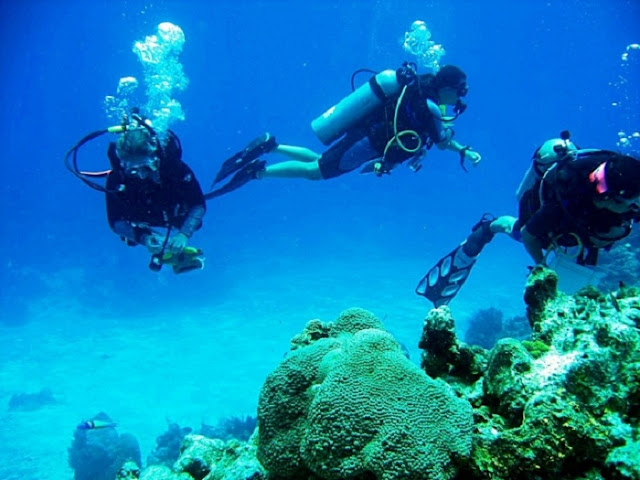 Cozumel is every diver's dream and one of the best scuba diving locations in the world. Teaming with schools of fish and boasting amazing views, Cozumel offers the avid scuba diver a vast playground. Cancun's new underwater sculpture museum features life-sized casts of humans and you can scuba dive, snorkel or enjoy the view from a glass-bottom boat just the same. 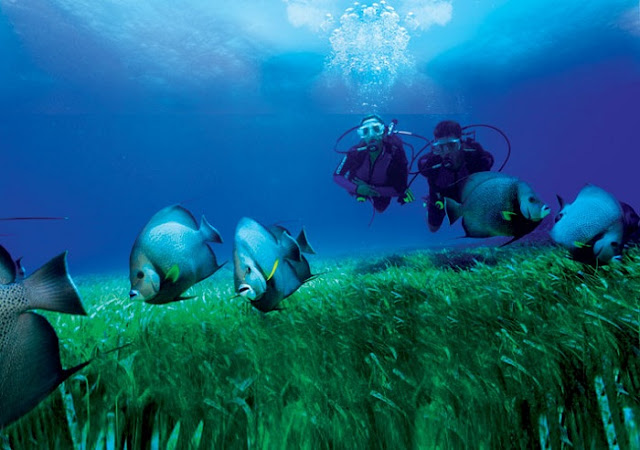 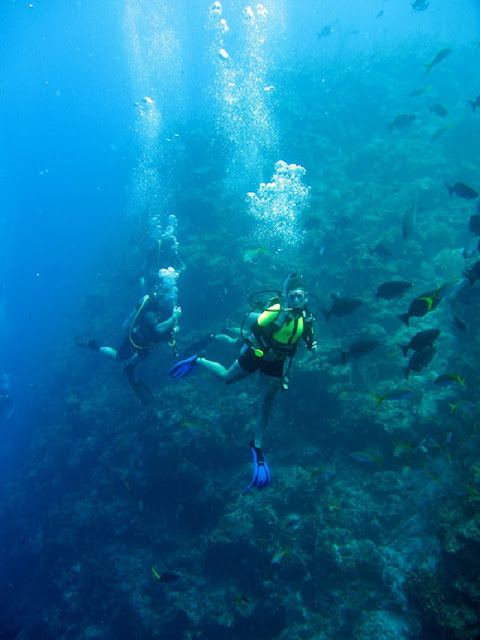 The Great Blue Hole is a large submarine sinkhole off the coast of Belize. It lies near the center of Lighthouse Reef, a small atoll 70 kilometres (43 miles) from the mainland and Belize City. The Great Blue Hole is a part of the larger Belize Barrier Reef Reserve System, a World Heritage Site of the United Nations Educational, Scientific and Cultural Organization (UNESCO). This site was made famous by Jacques-Yves Cousteau, who declared it one of the top ten scuba diving sites in the world. 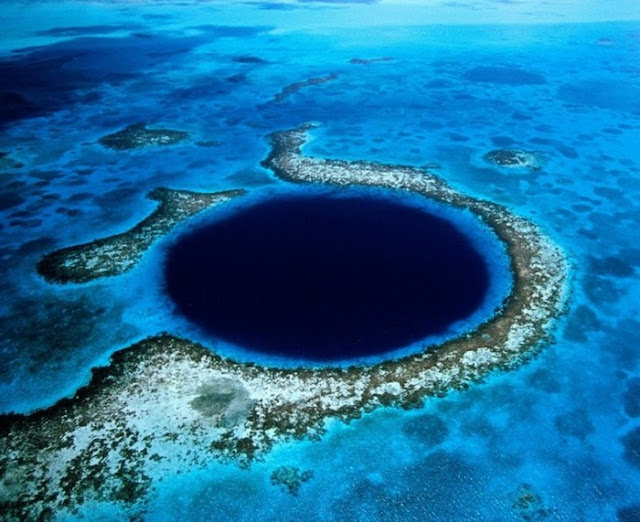 This is a popular spot amongst recreational scuba divers, who are lured by the opportunity to dive in crystal-clear water and meet several species of fish, including giant groupers, nurse sharks and several types of reef sharks such as the Caribbean reef shark and the Blacktip shark. Other species of sharks, like the bull shark and hammerheads, have been reported there, but are not regular sightings. Usually, dive trips to the Great Blue Hole are full-day trips, which include one dive in the Blue Hole and two further dives in nearby reefs. Recently diving has also been offered from the island Long Caye in the Lighthouse Reef only a couple of miles away from the Great Blue Hole. They offer 2 dives in the Blue Hole: North side and South side. 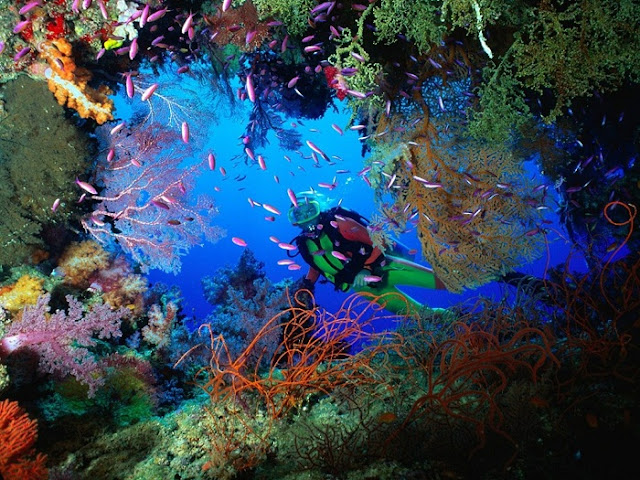 Fiji offers an incredible scuba diving experience. It is the "Soft Coral Capital of the World", the home of the "Great White Wall", the "Yellow Tunnel" and other famous underwater marvels. Scuba diving conditions and visibility are unrivaled year-round. Because of its clear water and dazzling coral Fiji is a favorite hangout for professional underwater photographers. 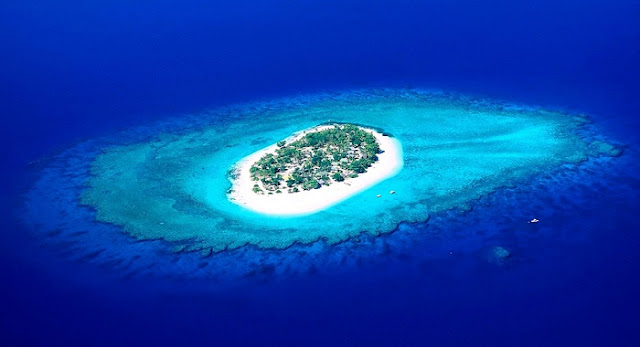 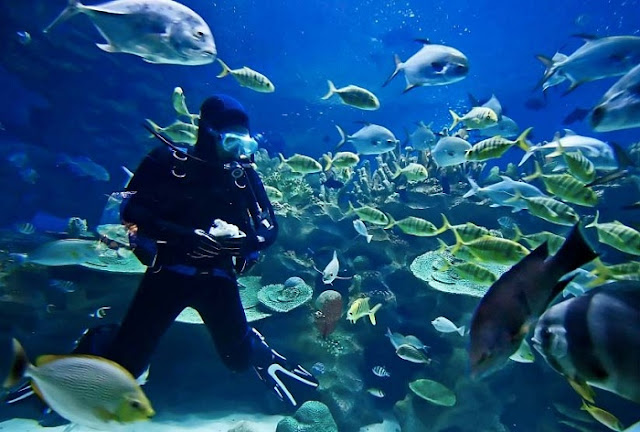 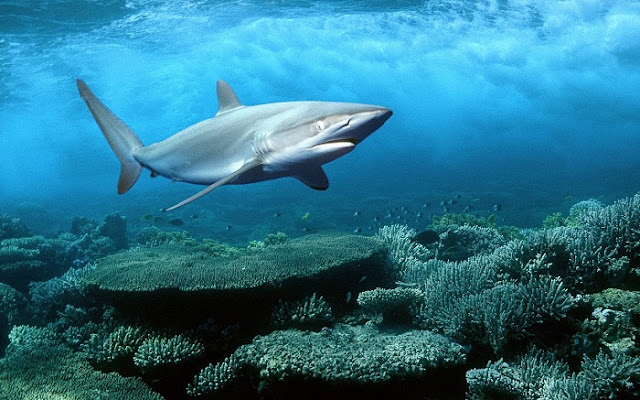 Giant stride into the Egyptian Red Sea and everywhere you look, on every dive you make, is a mind-boggling concentration of marine life. Large numbers of reef fish amass in swirling schools and an astonishing variety of coral and sponge species plaster every reef. Big pelagics like dolphins and sharks patrol deep wrecks and walls. As European divers have long known, it's off-the-chart diving--one of the planet's richest marine ecosystems in a sea that's landlocked by desert on every side. 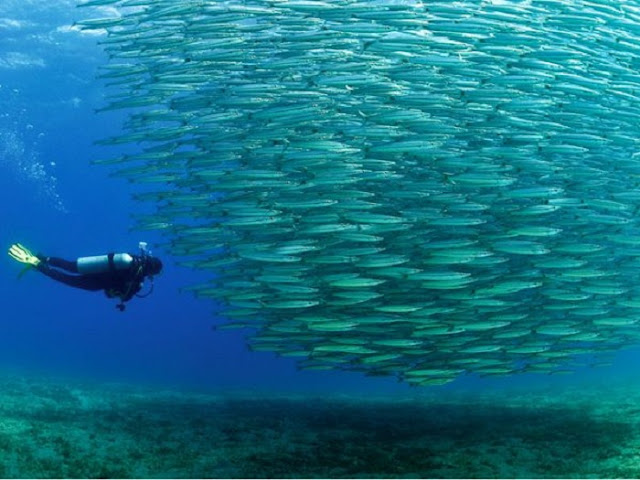 Bordered by seven countries, the Red Sea is a cleft of deep blue water formed millions of years ago when the Arabian Peninsula split from North Africa and the Indian Ocean flooded the basin from a small opening at its southern end. It's relatively isolated and with little freshwater flowing in, the 1,200-mile-long sea is saltier than most other bodies of water and features eccentric and colorful twists on Indo-Pacific marine life. Whether you go north or south on a live-aboard boat in the Egyptian Red Sea, you can dive a diverse range of habitats. A northern itinerary offers wrecks and deep walls while a southern one boasts beautiful reefs and coral seamounts. The choice is yours. 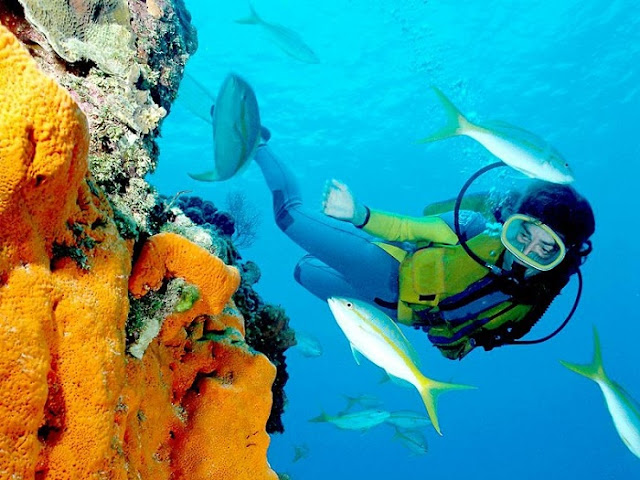 The Hawaiian island chain is made up of 132 islands, though we generally only think of the eight main islands, Ni'ihau, Kauai, Oahu, Molokai, Lanai, Maui, Kahoolawe and Hawaii. Surrounded by the Pacific Ocean and located over 2400 miles from the nearest continent has created a unique underwater environment, in fact over 25% of marine is endemic to Hawaii. 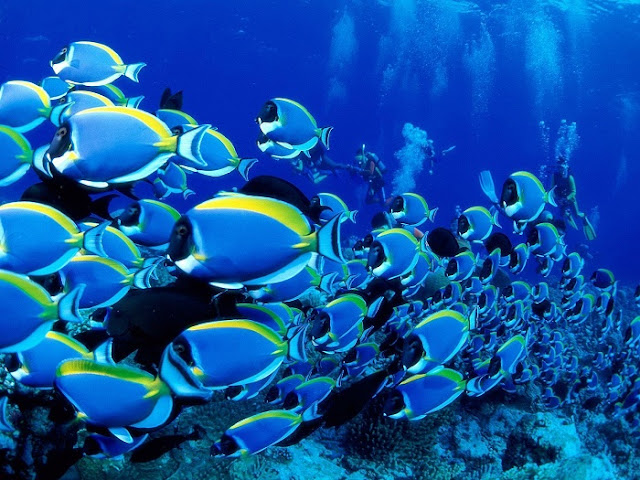 The four most visited islands are Oahu, Maui, Kauai and Hawaii, they each have their own unique characteristics and dive locations. Lanai, Molokai and Ni'ihau are dived less frequently and offer some unique dives and marine life, although generally recommended for intermediate to advanced divers. If you are interested in diving off Kahoolawe you will need to charter a dive boat. 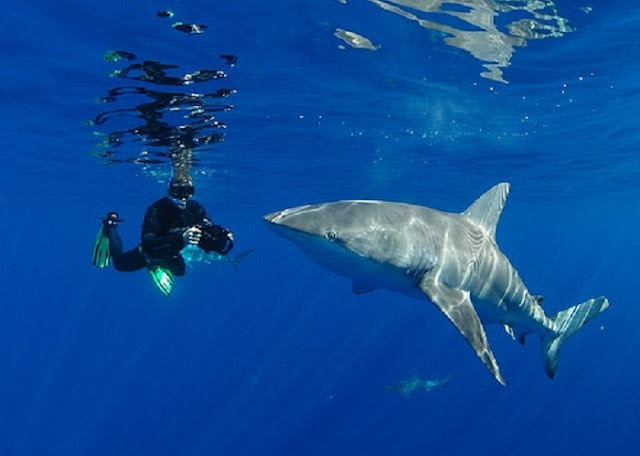 Despite being scattered over 7.5 million square miles of the western Pacific Ocean, the tiny islands that comprise Micronesia barely even show up on most globes. But these islands-including Palau, Yap, Truk, Pohnpei, Kosrae, the Marshall Islands, Guam, Rota and Saipan-are massive in the dive world, esteemed for their pristine reefs, life-covered walls, World War II wrecks and extraordinarily diverse marine life. If there were a pantheon of the world's greatest dive sites, Micronesia's islands would occupy a disproportionate number of the slots. 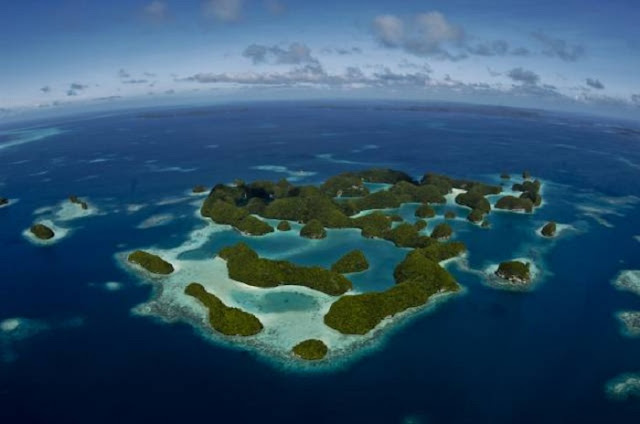 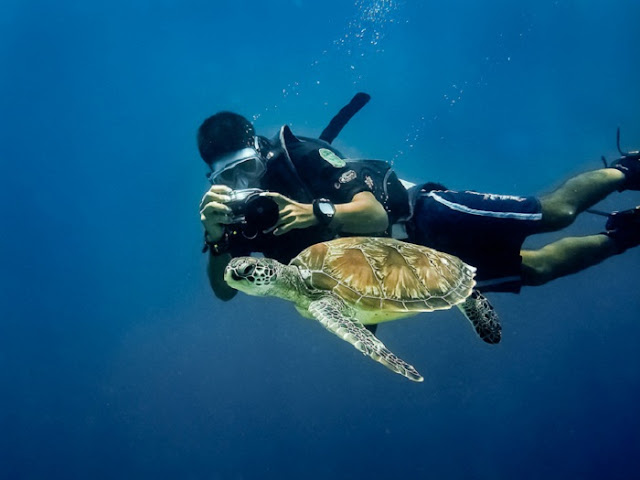 Sipadan is the only oceanic island in Malaysia, rising 600 metres (2,000 ft) from the seabed. It is located in the Celebes Sea off the east coast of Sabah, East Malaysia (which is on the island of Borneo). It was formed by living corals growing on top of an extinct volcanic cone that took thousands of years to develop. Sipadan is located at the heart of the Indo-Pacific basin, the centre of one of the richest marine habitats in the world. More than 3,000 species of fish and hundreds of coral species have been classified in this ecosystem. Sipadan has been rated by many dive journals as one of the top destinations for diving in the world. 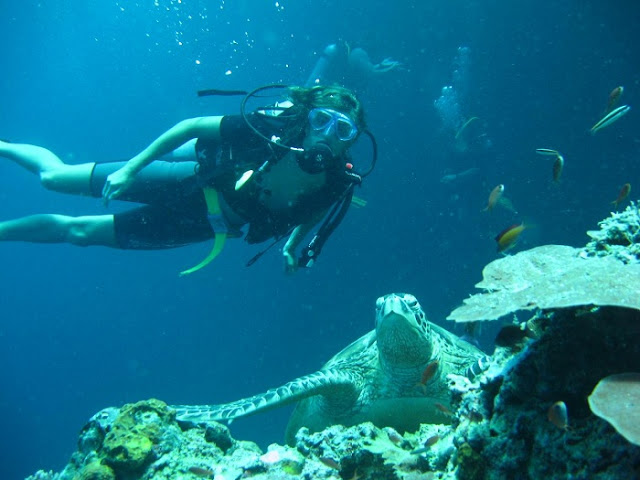 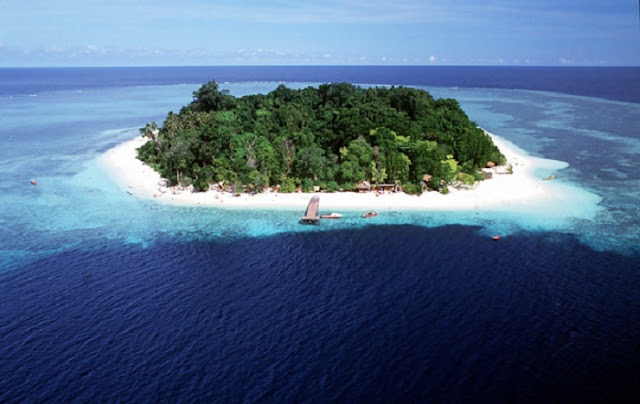 Posted by Addatoday at 3:52 AM