A Brief History of Android Sales

Addatoday
on 3:42 AM
No Comment
Android Phones, Phablets, Tablets are now part and parcel necessities in today's time. Ever since it first hit the stores back in 2008, Android’s growth has been seemingly unstoppable. It has become one of our day to day use essentials. It began as an open source response to the iPhone quickly took on a life of its own as it soon overtook Symbian as the most popular OS in the world, before moving on to dominate tablets and even other classes of products. Soon, everything you own may be powered by Android.

Here is a Brief History of Android Sales and how it has shoot up to be Numero Uno position in just 5 years of existence: 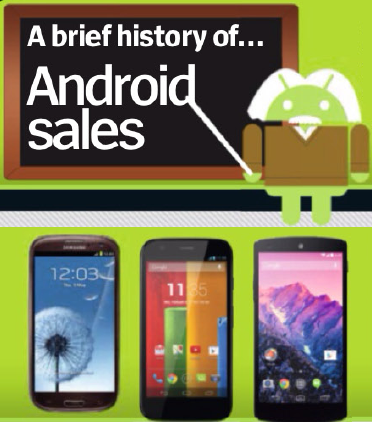 Year 2009: Completes First Year. Touches 8 million users. Android ended its first full year on sale with nearly eight million devices in the hands of users. It was dwarfed by the nearly 80 million Symbian phones sold in the same year.

Year 2013: 80% market share of Mobile Phones and Tablets. During 2013 Android was accounting for as much as four out of every five smartphones being sold. That may prove to be the peak as competition hots up from other operating systems.

Year 2014: Should Touch One billion user Worldwide. Latest figures from analysts suggest that Android will pass the one billion total device sales at some point this year. This includes phones, tablets, watches and other gear.

Posted by Addatoday at 3:42 AM