What is Google Now Voice Commands. 10 Things to Know!

Addatoday
on 3:43 AM
No Comment
What is Google Now? It is an intelligent personal assistant developed by Google that is available within the Google Search mobile application for the Android and iOS operating systems. Google Now uses a natural language user interface to answer questions, make recommendations, and perform actions by delegating requests to a set of web services. In addition to answering user-initiated queries, it also passively delivers information to the user that it predicts they will want, based on their search habits.

History: Google Now was first included in Android 4.1 ("Jelly Bean"), which launched on July 9, 2012, and was first supported on the Galaxy Nexus smartphone. The service was made available for iOS on April 29, 2013 in an update to the Google Search app. Popular Science named Google Now the "Innovation of the Year" for 2012. 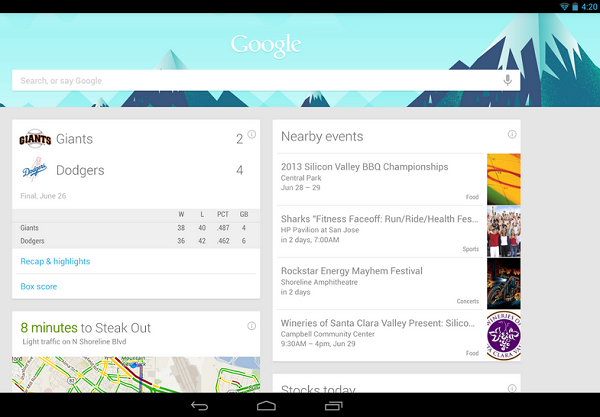 1. General Commands. Whether it's to find out the author of your favourite book, the stock price of a company, or even a new recipe, Google Now can now be used to search for nearly anything you need on your device using your voice alone.

2. Web browsing. Google Now integrates fully with the power of the Chrome browser to provide a quick way to open up your favourite webpages without needing to actually load up the browser itself. There's also the ability to open up any bookmarks you created on your phone or tablet, as well as to perform a standard Google web search.

3. Send SMS to.. By speaking directly into Google Now, it's possible to send an entire text message through it. Say "Send SMS to Nancy" followed by the content of your message. It's pretty accurate, but is worth checking before you send!

4. Listen to.. There's a whole host of compatible entertainment apps for you to explore in Google Now. Saying "Listen to" and specifying a song and band will play that track. A similar trick works for YouTube videos.

5. What is the time.. As well as being able to see forecasts of the weather all around the world, you can also search for the time in a specific location. You can use natural language to ask Google Now, and it should speak the answer to you.

6. Remind me to.. If you're an avid user of Google Keep, then make sure to use the note-taking feature. With this command you can set reminders of everyday tasks, input details of upcoming appointments, create shopping lists, or even set an alarm. All these notes can be synced with your Google Keep account. The calendar works likewise.

7. If maths isn't your thing, no worries, as Google Now can provide answers to a range of mathematical problems as well as conversions for measurements. Say "Convert [currency] to [currency]" to get your reply.

8. "Navigate to" and "Directions to" will get you a series of replies within Now using the power of the Google Maps app on your phone. Tap the icon within the result and Maps will launch with your route displayed and ready to go.

9. Beam me up.. There is a selection of hidden Easter eggs that are fun to explore in Google Now. Certain statements such as "Beam me up Scotty!' roll" and "Who are you?" will get you an often unexpected response from the app for you to have a laugh at!

10. Sports Update.. Any sports news update. Match Result or League Table. Literally anything related to Sports are easy to explore in Google Now. Try it.

How to use Google Now: It is available with Google Search Mobile Application for iOS and Android operating system.

Posted by Addatoday at 3:43 AM