Addatoday
on 3:47 AM
1 comments
For some time now, computer operating systems have tended to mean one of three things: Windows, Mac OS X and Linux. The dominance of the first two in particular has made it difficult for others to get a look in, but the wind is changing and now we’re seeing Android making major in-roads on laptops and desktop PCs.

Evidence of this was in abundance at CES in Las Vegas in January. Intel has been working hard for a while to port and optimise Android for PCs and we saw some PCs being unveiled that use Android as a standalone operating system. 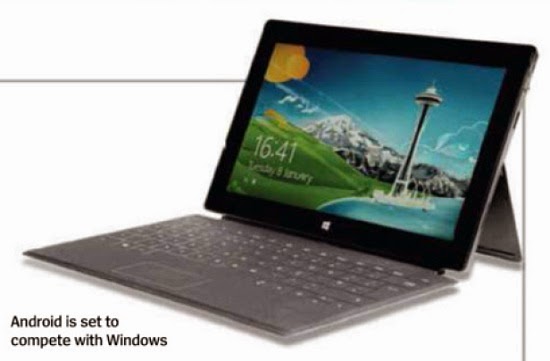 Based on the Linux kernel, this has been made possible by the Android x86 project, which has taken the open source OS and configured it for use on the x86 chips found in everyday computers.

That said, we’re still a way off from the days when people will ditch existing operating systems in favour of Android for their computers, so where Android is set to have more of an impact is as part of a dual-OS system with Windows. Again, we saw many examples of this at CES. Android apps can run within a Windows environment using virtualisation techniques. And AMD is in on the act in a collaboration with BlueStacks. Bringing the Android OS experience to Windows tablets, notebooks and desktops, there is support for hundreds of thousands of Android apps.

For Android, this is a smart move. People will become ever more used to using its apps and cement its position in the entire mobile-tablet- computer space. We suspect to hear a lot more about Android PCs over the coming years.

Some of the Latest Android OS Run Desktops and Laptops:

1. Asus Transformer Book Duet - As the world’s first quad-mode, dual-OS laptop and tablet convertible, users can sv/itch between Windows and Android systems with the push of a single switch button or virtual key.

2. HP Slate All-in- One Desktop PCs - With whopping touchscreens - the 21-kl00 has a 21-inch mon tor -these computers provide an alternative to Windows. Running Android, they sit on a desk and come with a keyboard and mouse.

3. Lenovo N308 All-in-One - Boasting a 19.5-irch touchscreen that is only 1.3 inches thick and unveiled in January at this year's CES, this all-in-one computer runs Jelly Bean and has up to 5C0GB of hard drive space.

4. Acer DA223HQL - This Android desktop is the first to pack a built-in battery, offering mobility from room to room, it features a full HD edge-to-edge screen with wide viewing angles and content can easiy be synchronised across devices.

Posted by Addatoday at 3:47 AM